When I sit down to write my list of New Year’s resolutions, it usually goes like this:

Things I Should Do in the New Year:
1. Exercise more.
2. uuuuuuuuuggggghhh.

I guess the three lists show a trend… that I don’t like to resolve to do things I’m simply not interested in, and that sometimes I feel I’ve accomplished NOTHING, that I’ve wasted yet another year not doing what I want, doing more working than playing, more frowning than smiling, more scrolling than learning, more spending than saving, blah blah blah. But, when I truly look back over 2015 as a whole, I see it was not a waste at all. Not a minute. Indeed, 2015 was marked by unprecedented newness and adventure, for both Brandy and for me. She and I both traveled to new destinations — she to Alaska and Oregon, and I to several national parks as far west as Yosemite. We also started an awards program called Harrisonburg Action Figures and presented the first one back in September. We were interviewed for a podcast — another totally new experience — by Kai Degner (Hello Harrisonburg), and because of that experience, we offered our first I Love My Burg prize to listeners who shared that podcast– a ride along with us, wherever he or she wanted to go, our treat! We covered the opening of two new breweries and a restaurant (Pale Fire, Wolfe Street, and Jalapeño), we attended Megan Tiller’s first ever pop up show featuring Bradford Lee Folk, and we finally tried some lavender ice cream. I’m teaching a class I’ve never taught in my seventeen years of teaching, and Brandy documented nearly twenty hikes all over Virginia and the US in her Took a Hike, Took a Camera series. Our lives are full of new things, not necessarily previously written down on a list of resolutions, but things that arise organically because we’re friends. So I think my “list” this year will simply be this: Continue doing new stuff.

This post is about a whole night of new things! Our ride along winner, Sharon Skates, wanted to try out Harrisonburg’s newest brewery, Wolfe Street Brewing. The brewery is located on Wolfe Street (duh) between Liberty and 42 and adjoins the Rock’n Wolfe Food Truck Park, which is super handy. The building was, at one time long ago, a chicken slaughterhouse, then a mechanic’s shop, and then it sat empty for a bit before the owner of the property decided to convert it to a brewery. Inside it’s a cozy space. The dropped ceiling directly over the bar holds Wolfe St. growlers re-purposed as lights. A split-level seating area leads to a homey and sizable yard out back. On the left side of the space, nine thousand pounds of malted grain in neatly stacked sacks is all that separates the general public from the brewing area. The entire brewery is cloaked in gorgeous woodwork by Benevolent Design, lending a Scandinavian cabin feel to the whole place. 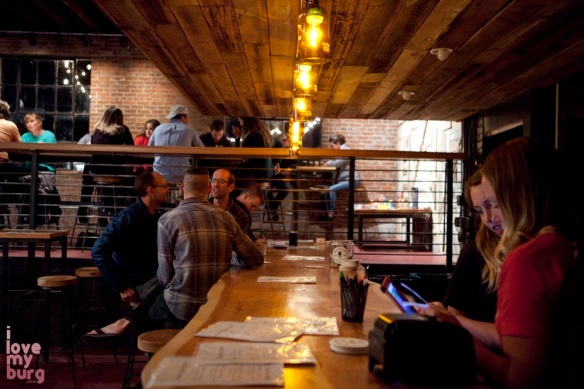 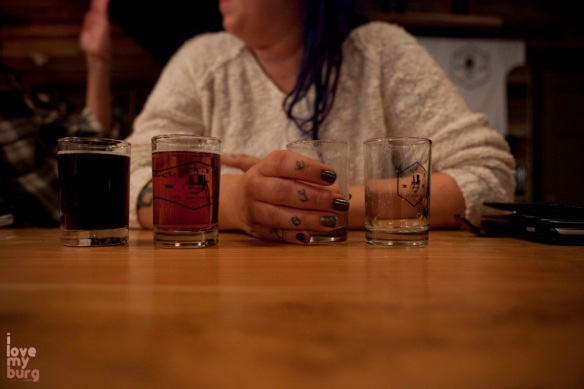 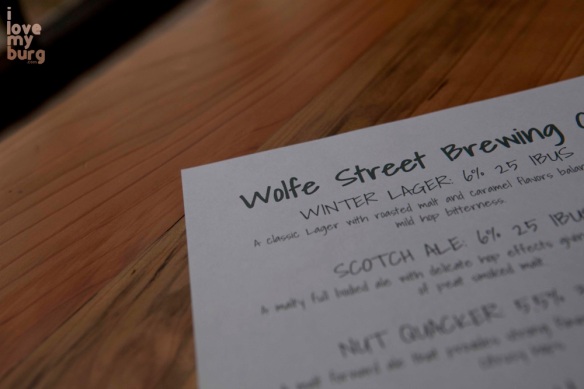 We sampled four beers that evening. The Winter Lager is their seasonal brew, and Hop Pocket has a crisp, piney flavor. The Scotch Ale is a full-bodied, smokey beer, and the Nut Quacker is spicy and refreshing.

Our next stop was the grand re-opening of The Mark-It in its new location at 125 West Water Street, right in front of the wooden bridge. You might be surprised to know that the business has been around for about 20 years — starting as a little kiosk in the mall, moving to several locations, and finally being operated by its current owners, Susie Diehl and Jeff Guinn. The walls of the store are filled with the work they’ve done over the years, for people and companies ranging from the Super Gr8 Film Festival and Pale Fire Brewing to Uncle Bengine and the Restraining Orders. The store looks great, the location is awesome, and we wish them happiness and prosperity in their new location! 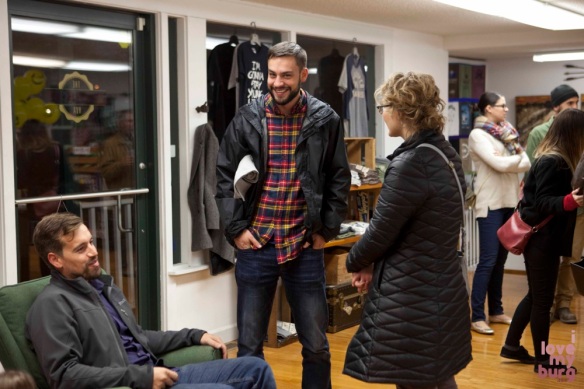 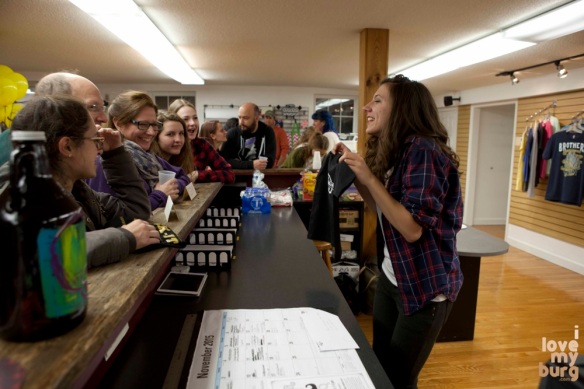 Brandy and I had been to Food Bar Food several times, but for Sharon it was a new experience and we were so happy to take her there. Seriously. The food is absolutely exquisite, and the prices are so reasonable. Plus the bloody Mary menu — sheesh! I might have to update my resolutions to include “try every singe item on the Food Bar Food menu.” For now, I ordered the haddock burger with a fried egg on top (omg, I’m drooling as I type that); Sharon got the duck leg, and Brandy got the Thai curry noodles. We talked about all sorts of girly topics that I can’t really share here, but we did discover something we have in common: we’re all old enough to know what a “pager number” is. If you don’t, you could always add “learn about obsolete technology” to your list of resolutions. 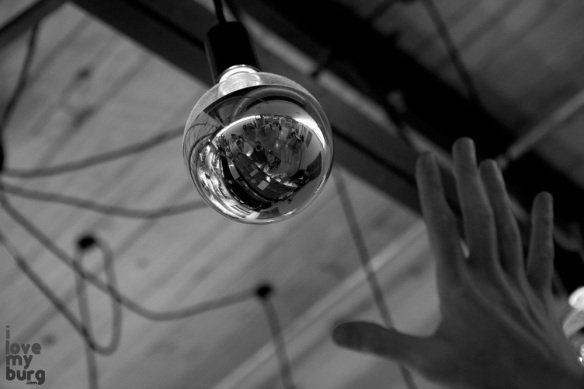 It’s a new year in our beautiful city and there’s so much to look forward to. This city is FILLED with people who “do new stuff” all the time, and that’s why Harrisonburg is so rich in art and music, gourmet food and top notch beer, unique shops and excellent, efficient service. So, thanks for helping me keep my resolution, Friendly City. I couldn’t do it without you.

Copyright © 2012-16 · All Rights Reserved · ilovemyburg.com. Written content by Katie Mitchell. Photos by Brandy Somers. This material may not be copied, downloaded, reproduced, or printed without express written consent. Thank you for respecting our intellectual property.