Oh, suburbs, you’re killing us all.

The invention of suburbs was one of those “seemed like a good idea at the time” developments of the modern era. People could move out of those crowded, noisy, dirty cities and into a larger home on a sizable lot and enjoy peace, quiet, relative privacy. It sounded divine at the time and was quickly accepted as “a good idea.” But, as humans are wont to do, we didn’t think about the consequences… longer commutes in the car, more gas, more time, more water and other resources all for the sake of having a slice of real estate all to yourself. And the cities, vacated, simply fell apart. Businesses left. Factories closed. Crime increased. What a mess.

Then postmodernism came along and showed us that we don’t know jack. We have no foresight. We bulldoze along without thinking of ramifications down the road. At least we started to become aware of our lack of awareness, right?

And now we’re in some kind of post postmodernism where we’re trying to stem the tide of all those bad consequences. For example, we woke up to the fact that cars use too much gas, and the hybrid was born. Yay — fuel conservation! But what do I do when the battery in my Insight poops out?? I can’t just throw that thing in the landfill… And plug-in electric cars that require no gas at all — what a great idea! But if you’re plugging it in to an outlet fueled by coal, then… there’s not much environmental advantage. These are the problems we now see and are trying to fix… but when we fix them, will we finally have developed some foresight so we don’t create yet another new problem?

Problems like this reach an apex, where they’ve been worsening at an exponential rate and they start to double-back on themselves… and the only option is to start over. Get back to basics. We probably all recognize, on some level, that we can choose to simplify now, or we can wait until conditions deteriorate so badly that we’re forced to. Here in the burg we’ve been working on simplifying for some time. We have a number of community farms, like Port Road Community Garden, Collicello Gardens, and Our Community Farm, to name a few. The folks at The Natural Garden will actually arrive by bike to work in your yard. We’re a town of co-ops and collectives and local businesses and farmers markets. All of these endeavors underscore Harrisonburg’s desire to get back to basics: to reduce urban sprawl and make it easier for people to ditch their cars and walk or bike to work and school. To spend money locally. To undo some of the damage we’ve caused and try to conserve a little here and there. And to work as a community to solve our own problems, rather than leave those solutions in the hands of strangers. Slowly but surely, this community is gaining ground.

To that end, it’s Bike Month in Harrisonburg, kicked off on May 3rd with a Costume Bike Parade downtown. As I headed to the Turner Pavilion to meet Brandy, I saw the first cyclist of the evening: Noel Levan, sporting Kermit The Frog socks and a clown nose, among other silly items. Little by little bike enthusiasts started rolling in. Some of the costumes included a Banana, Mario, and a shiny metallic sword-bearing Robot (Nate Shearer). Some type of fox-like animal, which might have been a kangaroo because I heard him refer to himself as marsupial. An old man in a bathrobe, a spring fairy, and a cat with a bull horn. A cow wearing a boa, a butterfly, and a disco sompn-or-other.

There were a dozen or so kids — a little Spiderman, Pebbles, a doctor, a knight, a couple of fair princesses…

And there were a few scoundrels — one who looked like Captain America but might have been a sinister Gladiator… gun totin’ Blue Bullet and the Bandits (they actually had a horse head on the bike)… and <eeek!> Jason.

And let’s not forget Tony Lopez being assaulted by Dark Spiderman! 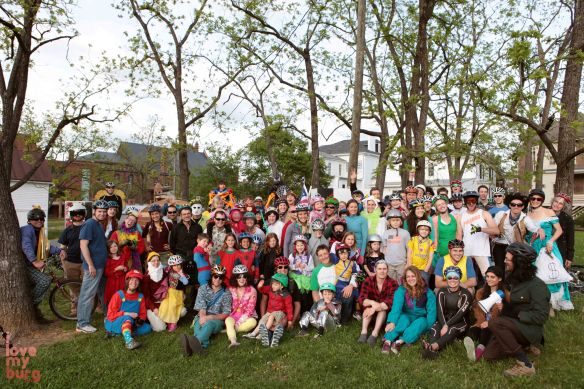 After the parade, participants attended Singletrack High and the Adventure Seen Cycling Film Festival at Court Square Theater. What a night! 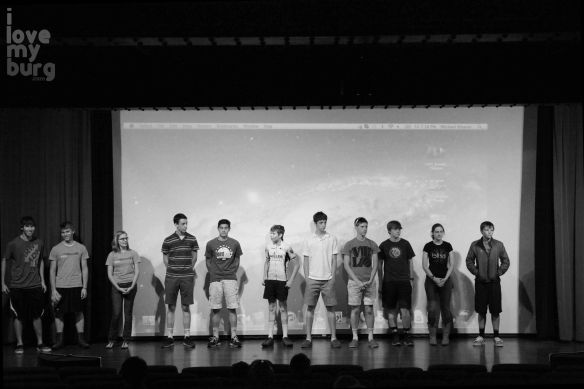 But that’s not all. The month of May is full of bike-related events to bolster support for our ever-growing cycling community. Just last week Harrisonburg enjoyed Bike to Worship, Bike to Work, and Bike to School events, as well as the annual Ride of Silence. Still to come, an Ice Cream Ride, Sunday the 26th at 2pm at the Wolfe Street Kline’s, and if you donate to the Northend Greenway this month, you could win a bike with accessories! And the burg has lots of long-term bike initiatives in place, including Rocktown Trails, Bluestone Trail, the Northend Greenway, and the Bike-Ped Plan, all in the name of improving safety and accessibility for cyclists and pedestrians.

When we look at the world, or rather, our corner of it, it’s easy to see the problems, the destruction, our detachment from nature, other people, and ourselves. But little things, like this event, start as a seed of hope in one person’s heart, germinate into an idea hatched among friends over a few cups of coffee or mugs of beer, grow into a community event, and then evolve into a movement. Action. Awareness. Progress. I moved here nearly twenty years ago. I was a 21 year old wearing a huge set of blinders and didn’t know squat about art or the environment or social consciousness. I essentially grew up here; most people do mature a great deal between age 21 and 41. But this city made me evolve; it made me aware; it woke me up. This is where I learned to care about things way bigger than I. I am so grateful my kids are learning, too. So grateful this is my community. So grateful for all of you.

Copyright © 2012-13 · All Rights Reserved · ilovemyburg.com. Written content by Katie Mitchell. Photos by Brandy Somers.This material may not be copied, downloaded, reproduced, or printed without express written consent. Thank you for respecting our intellectual property.