I remember my dad’s basement fondly. On one side, his workshop. I remember spinning the pin on the vise clamp — open, shut… open, shut. Sometimes with a Barbie perilously squished inside. Other times holding a piece of wood Daddy asked me to sand for probably no purpose at all. All his screwdrivers and hammers and wrenches hung on hooks, arranged neatly in rows by size, with every square inch of space on the pegboard used to its maximum potential. I remember little olive or pimento jars of nails and screws and pins and such. I remember a lot of sawdust.

On the other side of the basement sat a ping pong table and a sofa, flanked by boxes of Christmas decorations, outgrown clothing, National Geographic magazines, and mementos. Mom and Dad would hold neighborhood cocktail parties and inevitably, the party would migrate to the basement, as parties are wont to do. Unfortunately I was still little when we moved from that house and I never had the distinct pleasure of “drinking in Dad’s basement,” but I’m sure he threw back a few.

The Friendly Fermenter, Harrisonburg’s first brew-on-site brew shop and nanobrewery, feels like your dad’s basement and also a little like Cheers — you can see people’s feet through the window as they traipse down the stairs and into the taproom. A large L-shaped bar with TVs and big barrel tables, made by owner Shawn and his dad, fill the space, with shelves on the side holding the brewing supplies: beakers and tubes and thermometers, scales and long-ass spoons and all the ingredients you could need. Staring at all that science lab stuff was intimidating, but then I found out that The Friendly Fermenter offers a variety of classes and on-site brewing sessions to help demystify brewing for the average Joe or Jane. In the on-site brewing workshops, participants leave with five gallons of beer they’ve brewed themselves!

The Friendly Fermenter uses a one-barrel brewing system which produces 2 – 4 kegs at a time. For this reason, their selection changes frequently. On the day Brandy and I were there, they offered seven beers. We ordered a flight and tried them all. First was The McGary, an Irish Stout. It’s your classic smooth stout with an ample head and full flavor. I admit I was not looking forward to the next beer, the Fudge N Beer Choco PB Porter, simply because I’m not a fan of what I call “dessert beers.” They’re just so sweet. But this one possessed a decadent richness without excessive sweetness. It still tasted like beer. GOOD beer.

The Woof! Russet IPA was more malty than other IPAs if that’s the end of the IPA spectrum you enjoy, unlike the Waning Light APA which to me seemed hoppier. Both were fantastic.

Next was Lily of the Valley — an Irish blonde named after Shawn’s daughter, with a grassy, earthy flavor, followed by Brehfuss Blonde Coffee Stout. Yes, a blonde coffee stout. I couldn’t believe my eyes when I looked at the glass — how is this sunny light thing a STOUT?! I also couldn’t believe my nose — when I smelled it, it smelled like a hot steaming cup of coffee. Or as Brandy put it, “like a holiday kitchen.” That holiday feel might come from the homemade vanilla extract incorporated into this brew. Brehfuss inspired a short respite from the flight during which we theorized about how extracts are even made, and we imagined desperate 1950s housewives boozing it up on high-price vanilla extract when the cooking sherry was all gone. The flight rounded out with The Bee’s Knees Honey DIPA, a flavorful yet mild beer with a light sweetness, supple like a bee’s knees might be. 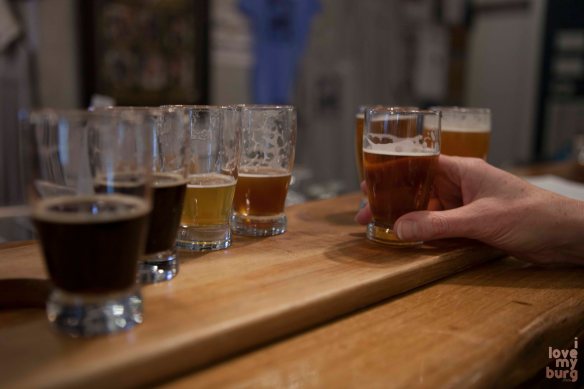 In addition to the classes and supplies and delicious beers, The Friendly Fermenter hosts live music pretty much every Friday and Saturday, including The Lamp Man on April 5, Damn Four on April 6, and Crop Circle Conspiracy on April 7. If you were planning on cleaning out your own basement that weekend, don’t bother. You’ll find all you need at this one.

Copyright © 2012-18 · All Rights Reserved · ilovemyburg.com. Words by Katie Mitchell. Photos by Brandy Somers. This material may not be copied, downloaded, reproduced, or printed without express written consent. Thank you for respecting our intellectual property.