Brandy and I were excited to attend the invitation-only pre-grand opening on April 18 of Bongo Restaurant and Lounge on South Main Street in Harrisonburg. We were greeted at the door by a friendly hostess who pointed us in the direction of the bar. Once settled on our stools, we ordered a couple of drinks and started chatting it up. Servers carried trays of appetizers around the busy restaurant while people mingled, laughed, and enjoyed themselves. It was a very comfortable atmosphere.

I turned to grab a quesadilla from one server’s tray when I heard her say, “Ms. Mitchell! I haven’t seen you in years!” It was Jordan, a former student of mine from way back when. I was instantly reminded of the time she helped me break up a fight between two kids at my school years ago…. Scratch that, she didn’t help me—she did it single-handedly while I stood there helplessly screaming, “Ladies!” at the two girls rolling around on the floor outside my classroom. It was a strange scene—the two girls were engaged in an all-out brawl complete with eye gouging and hair pulling… in total silence. It was like two mimes fighting. I asked a male student nearby to help me break it up and he just smiled and said, “No way.” Heh heh. And just when I was going to push the red oh-dear-Lord-someone-get-down-here-and-help-me button on the wall, Jordan sailed in (in my memory, she’s glowing and moving in slow motion) and ripped them off of each other. When I got back from walking the two girls up to the office, I noticed clumps of hair all over the floor. Ick. After that school year, I didn’t see Jordan again until this night. Small world.

Originally Lloyd’s Steakhouse (and same owners), Bongo serves traditional American classics and Latin American food. To guarantee a successful reinvention of the establishment, they hired celebrity chef Ricardo Cardona  to shape the menu and train the staff. Hailing from New York City where he serves as head chef to the New York Yankees and owns four Manhattan restaurants, Cardona brings twenty-five years of experience and skill to our friendly city. He even stars in the TV show Mission Menu, and Brandy and I got to interview him!!

But first we settled in at the bar to sample the goods. The all-girl bar staff offered three specialty drinks—a margarita, Bongo Punch, and sangria—as well as a few varieties of beer and wine. As this was their preliminary opening, they had a limited menu, but now their menu (they serve lunch and dinner) is extensive and they have a full bar. For their complete menu, visit the Bongo web site. We nibbled on all sorts of lovelies prepared by Chef Cardona, including chicken quesadillas with guacamole and sour cream; chicken and beef empanadas (what happy, puffy triangles!); the Bongo burger; meat on a stick with barbeque sauce; and chicken skewers, with which I managed to stab my tonsil. By the end of our binge we had quite a collection of sharp, pointy sticks, but before Brandy could get a photo, our conscientious bartender scooped ‘em all up. 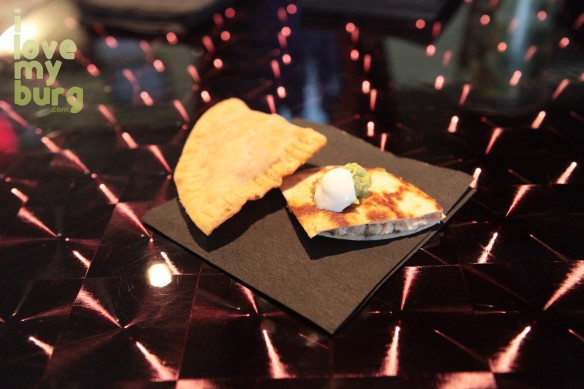 Before long we were invited into the kitchen to meet Chef Cardona. We didn’t want to bring all our purses and raincoats and such into the kitchen, so we left our seats at the bar and asked a group of strangers to watch our stuff. Eh. It is the Friendly City, after all.

We introduced ourselves. “I do the photos!” Brandy announced. “I do the writing!” I added. And Chef Cardona replied, “I do the cooking… and the yelling!” He was a bit busy, so Brandy took a few photos and we got out of his hair.

A bit later he was able to sit down with us in a separate room, the lounge. The lounge is a really large room with an urban, swanky feel. A long
bar runs along the front half of the room with tons of seating in an adjacent dining area; the back half of the room is a spacious dance floor and a DJ booth. They host dance parties on Thursday and Friday nights—Thursday nights are for college students only—and Latin dancing on Saturday nights.

We were so excited to sit down with Chef Cardona, although he had just a few minutes before he had to get back to the kitchen. He explained to us that his role at Bongo is that of consultant. He lives in New York, where, as mentioned earlier, he owns several restaurants but also consults with other restaurants in hopes of improving them, which is the premise for his upcoming show, Mission Menu. The show’s five cast members, including Cardona, find restaurants in need of help and overhaul their menus to bring in new life and flavor. Cardona has done this for Bongo, too. He consults with the Bongo staff on a bi-weekly basis to help them consistently provide delicious and interesting food and build a strong customer base. 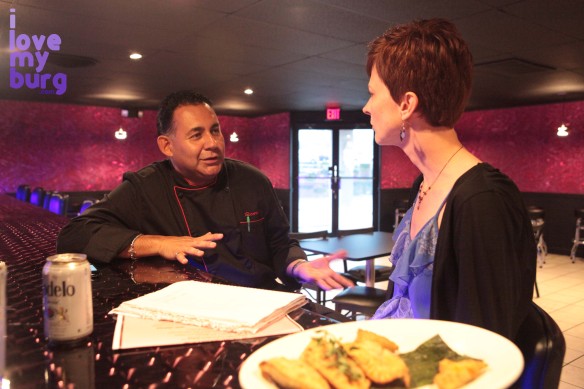 Since he’s spent so much time in the Burg, we had to ask him… “What’s your favorite restaurant here?” (Other than Bongo, of course.) He hedged a bit, stating that we have many, many wonderful restaurants (yay, Burg!!!), but his favorite is Clementine, with Beyond getting “high marks,” too. Ya can’t argue with that, can ya, Praserth? 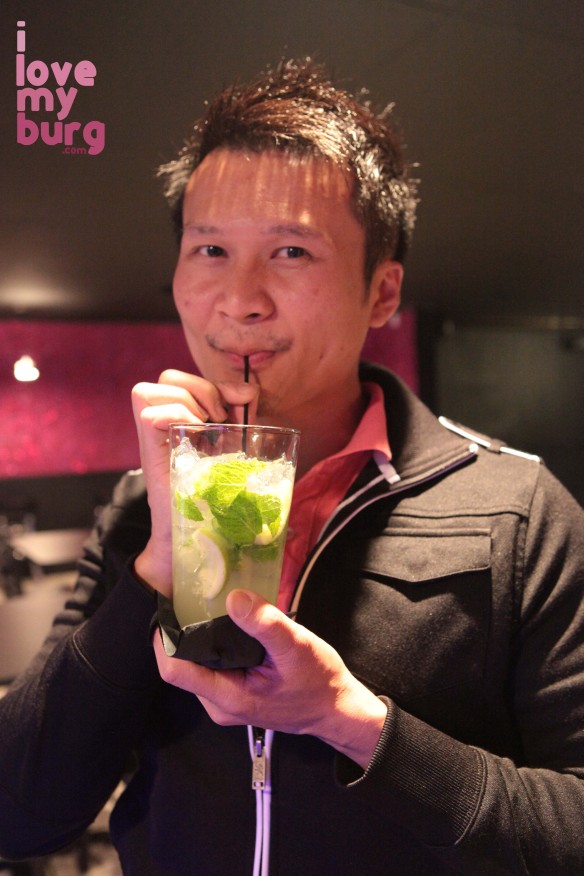 So after lots of delicious food and a fun chat with the chef, it was time for us to call it a night. Thanks, Bongo, for the lovely evening. Visit them soon at 2455 South Main next to Kline’s Dairy Bar, open Tuesday through Thursday til 9pm, and Friday through Sunday til 2am.