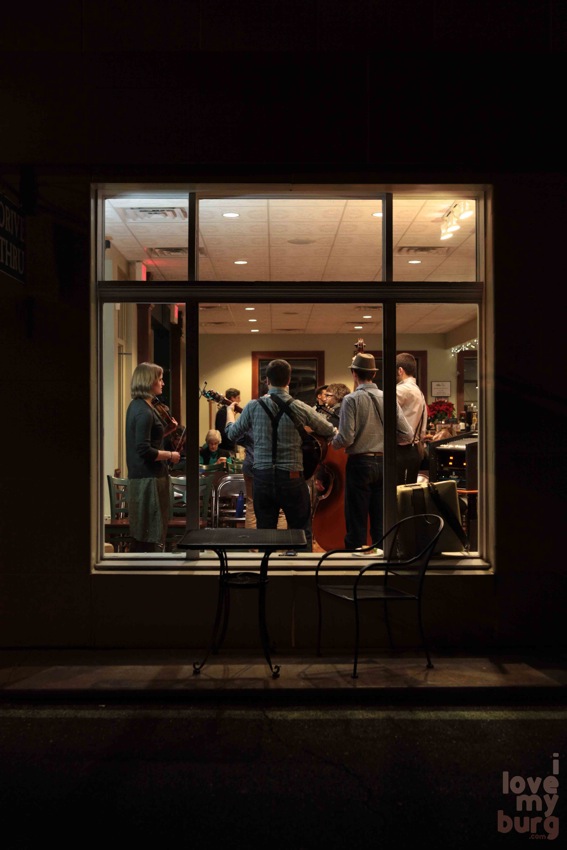 They showed up in uniform, if you count suspenders, the color blue, leather shoes, and facial hair as a uniform. And possibly the last name Yoder.

Well, except for the ladies, of course. But only in the facial hair category. You’d expect a group of people in uniform to work together toward a common goal. All there for the same purpose, performing as a team, complementing each other. And this past Friday, the Walking Roots Band delivered on that expectation. Brandy and I were privileged to have attended their CD pre-release concert — a celebration of their long-awaited album Carry Your Heart. 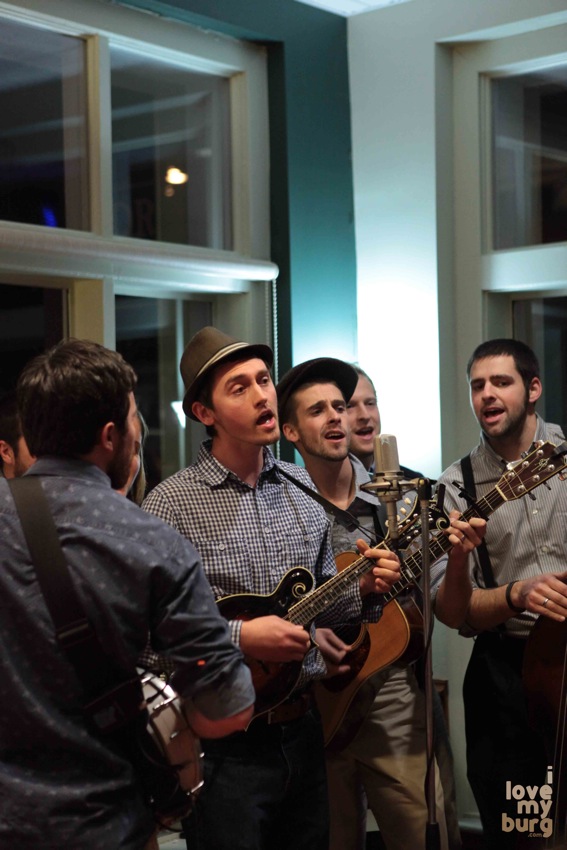 This eight-piece outfit squeezed themselves and their arsenal of instruments into the far end of Greenberry’s Coffee Co. for a cozy performance in front of roughly a hundred onlookers of all ages. We all sat elbow-rubbing close to one another, and the band members huddled naturally around an old-timey microphone. For a couple of friendly, heart-warming, and sentimental hours, we enjoyed the musical symmetry of Seth Crissman, Jackson Maust, Adam Schmid, Greg & Kristina Yoder, Lauren & Mitch Yoder, and Michael Yoder.

Just as their uniform was likely unintentional, they seem to play off one another as if by instinct rather than rehearsal. They’re obviously very giving people — during the introductions I learned that they’re all teachers and nurses and philanthropic types with qualities reflected in the music they write. They write about humanity: about God and love, dancing and freedom and nature, but also pain and suffering and loneliness — all parts of life’s grand song. Their voices oblige each other in delicate harmonies about bein’ poor and country girls and moonshine and honey. They sing about havin’ money (or not havin’ it) in a Partridge Family-esque ditty: “little things mean the most, and the little things are free.” And they steer from negativity, even in humorous ways: “You can take your sorry glasses…”

At one point they conducted an informal sound check by simply asking the audience if everything sounded okay. Someone yelled, “More bass!” and Jackson quickly suggested the spectator move to the seat right in front. :) Adam sang a song about the one who got away… a song he admitted he didn’t fully understand, because the one he wanted didn’t get away: his dear Katie.

Out of nowhere, amid an accordion, a harmonica, a mandolin, and other such instruments, came a rap song with full-on gesturing called “Sweater Weather.” Yes, it was funny and most certainly a crowd pleaser… but I don’t know. I see some real crossover possibilities, what with Greg lookin’ all Eminem-ish and the rest of the group channeling Dobie Gray in the chorus.

Then Adam totally shifted gears when he sang a song about dying. He first asked us, “Do you want to hear a sad song, or one about how love can really mess with a man?” Uhhh… is there a difference? And the sad song was sad, yes, about someone who’s ill and dealing with the confinement of pain, suffering, and regret, who’s “wishin’ to feel free,” but who also takes solace in knowing he’s “goin’ home to Jesus.” Hope is an ingredient of every one of their songs.

They continued, singing about community and apiaries, moonlit meadows, and gratitude. They played three songs from their “Sacred Songs” project. In one of them, they combine three Psalms from three centuries. The kids especially liked “The Gardening Song” which tells the tale of a wascally wabbit who eats the farmers greens, and the fox who kills the hens, and the bear who steals the honey… and the farmer who recognizes they’re just doin’ what they do. After that, it was nudging bedtime for our little ones, and we left the warm cafe, condensation running down the windows, and stepped out into the chill night, happy.

Now, go like these folks on Facebook so you’ll be informed when they’re performing nearby again. They’ll warm you up!

2 thoughts on “a feel good time: the walking roots band.”