Or maybe euphenized. Whatever. What I’m saying is, this blog is usually rated PG. And what I saw at the Rocky Horror Picture Show — on screen and in the audience — was NOT.  So I’ll be putting some things mildly, if you know what I mean.

Gahd, I love this town!

Brandy and I planned for WEEKS to attend Court Square Theater‘s presentation of The Rocky Horror Picture Show. I’d never actually seen it on the big screen… I’d only surreptitiously viewed bits and pieces of it long before I was old enough to, and the last time Brandy watched it was when she got it through the BMG video club. On VHS. Yes. Needless to say, I didn’t know exactly what to expect. I knew it was “weird,” and racy, and interactive… but I did NOT expect the level of participation I witnessed that night.

When we arrived at the theater, I noticed people were dressed up. Not “dressed up” like fancy… but dressed in costumes. Everyone was feathered and painted, horned and sequined, glossy, ruffled, glittered, laced, fishnetted, fedora-ed, boa-ed, suspendered, party-hatted, and even slightly naked.

I was beige. Sitting in the middle of the theater with my glasses and notebook and clicky pen, wearing beige pants and a slightly darker beige sweater. BEIGE. I was immediately recognized as a first-timer by this gal…

… and promptly tagged with a big red V. I felt a little better when I had two Three Brothers Great Outdoors-es in my hands. I carried them and our baggie of props — assembled and sold by the theater for a totally-worth-it five bucks — to our seats. The baggie included rice, a rubber glove, a noisemaker, confetti, a page of newspaper, even a water gun (egads!), and I’m sure some items I’m forgetting, plus a set of instructions for when to use said items. The teacher in me was excited to organize our supplies while the emcees (Julian “J” Kline — the V lady — and Tony “Left Skate” Lopez) welcomed the ever-burgeoning crowd.

Before the show, everyone who dressed up (which was pretty much everyone, except Brandy and me) was invited to participate in the costume contest. First, the Magenta competition. All the Magentas filed onto the stage. Tony gushed, “So many French maids! I’ve never wanted my home cleaner than I do right now!” The audience cheered to indicate their favorite Magenta. 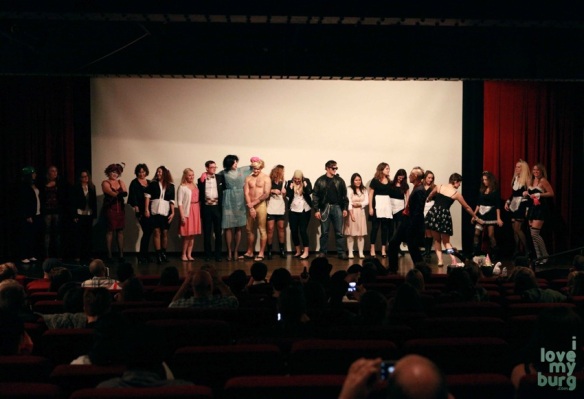 Next up were the other characters… the Brads, Frank-N-Furters, Rocky’s, Riff Raffs and such… and here are the winners! 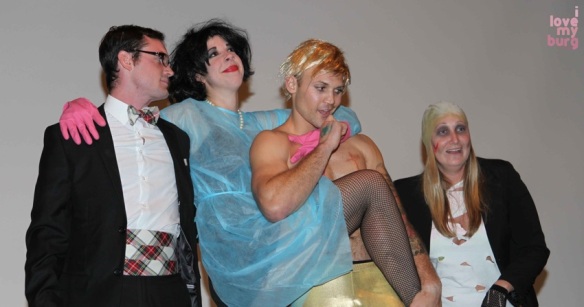 Then all the newcomers, like me, had to stand up while everyone yelled “Virgin!” at us. I felt something reminiscent of middle school shame… Then, the giant lips appeared, and the ride had begun. Don’t worry. There are no spoilers here. While I was thoroughly entertained by the film and the audience, there were several times I didn’t know what the heck was going on. Plus I was so consumed by the baggie of props and being ready for the next activity that my attention was divided. I mean, I wore the rubber glove for like ten minutes because I didn’t want to fall behind.

AND, right at the moment I was supposed to squirt water all over people, I DROPPED my water gun and was completely defenseless. No worries. J came down the aisles and sprayed everyone. No one escaped. It sounded like a flock of geese in there when the noisemaker part happened, and Brandy and I were both nerdishly concerned about the mess after the confetti landed all over the wet floor.

Based on the colorful words everyone was screaming at Brad and Janet, I guess they weren’t the hero and heroine, but I kinda felt sorry for them. Innocently having car trouble, innocently approaching a house to ask for help, innocently having silhouetted encounters with others behind a sheet. Wait.

And right when I thought those two would never make it out of there alive, Meatloaf showed up. And I had to pee. Did I? Hell no. Meatloaf was on, singing his fat head off. And everyone was dancing in the aisles and it was AWESOME! Then the film took a violent turn, and Meatloaf, as Brandy said, became hamburger. Toward the end, the characters took a friendly dip in the pool and sang “Be It, Don’t Dream It,” which was rather touching, and all the frozen characters were electrically unfrozen. And after all he’d been through, being held there against his will and all, a forgiving Brad asked about Frank, “But what’s his crime?” Really, Brad? You’re soaking wet and wearing a corset. And then there’s a bizarre return to the home planet where everyone’s hair is awful. I still don’t know what the point was of that neckless narrator guy.

When the film ended, the room exploded in applause. It’s weird to clap at a movie, because it’s not like the actors are going to come out on stage and take a bow. But we all clapped and clapped and clapped some more. The last time I clapped at a movie was at Rocky (the one with the Russian). Or maybe it was Return of the Jedi. Either way, I was a kid and my dad was sawing logs in the seat beside me.

Thanks to Court Square Theater for hosting the show and making those goodie bags. I’m sorry to the folks who had to clean that up, but thank you to them, too. And thanks to Tony and J for enthusiastically and energetically emceeing the event. And thanks to all the Burgers who dressed up and made us smile!! You ROCK!

Today and tomorrow at Court Square Theater, you can catch Enough Said at 5:30 or 7:35, and next week is the SuperGr8 Film Festival, Wednesday and Thursday! Yay! If you’re curious, here’s what happened at last year’s festival.

1 thought on “prepare to be euphemized: rocky horror picture show 2013.”