It was warm that night, all the way around, starting with Melanie Copeland’s smiling face at the door. Warmth circled each dessert table, filled coffee mugs, and cushioned our seats. It danced on everyone’s bright faces, softened every handshake and hug hello, and floated on the air in music both delicate and boisterous.

To be honest, I didn’t really know what to expect at Our Community Place’s 4th Annual Community Christmas Concert. Our Community Place is a non-profit organization that promotes personal growth and community well-being in Harrisonburg, and which specifically seeks to help those who struggle with poverty or difficult life circumstances. It opened in 2008 after seven years of fundraising and renovations to their location on E. Johnson Street, near The Little Grill. The Christmas concert is an annual fundraiser to help support OCP as well as Our Community Works and Our Community Farm. The invitation promised desserts and music, but it was way more than cookies and carols. 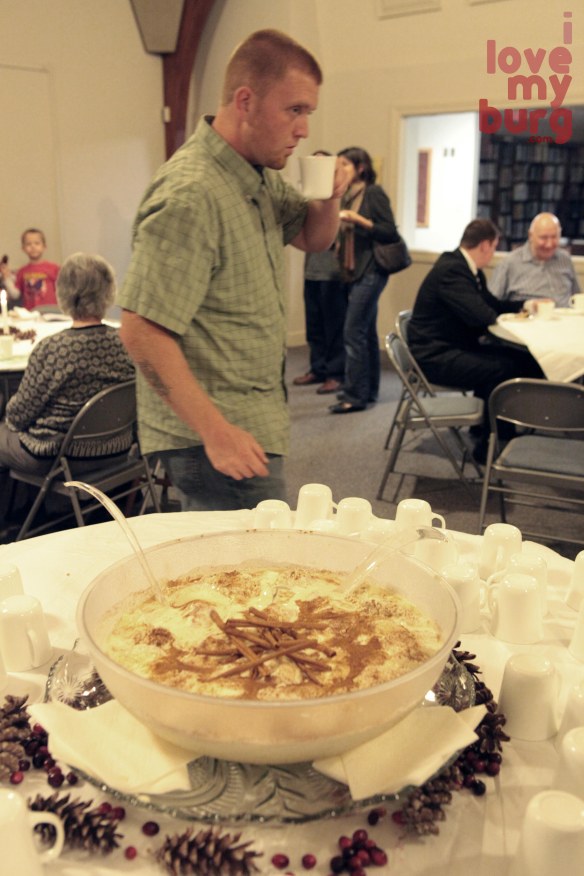 First, the desserts, provided by Dayton Mennonite Church. Cheesecake, pie, cobbler, cupcakes, cookies, breads, and brownies. And I had a Charlie Brown flashback when I saw the giant bowl of popcorn. And again when I saw the two Christmas trees flanking the stage in the sanctuary of Park View Mennonite Church–small and skinny, but alive and growing nonetheless. Anyway, the kids stuffed themselves with dessert while Brandy and I browsed. As part of the fundraiser, OCP was selling handmade boxwood wreaths, cookbooks, and two Christmas CD’s featuring local musicians. We made sure to purchase those.

Another thing offered that evening, which Ken Wettig explained during intermission, was membership in their Community Supported Agriculture program. In a nutshell, you pay to join the program, and in return you get fresh vegetables and eggs from OCF. I know $400 seems like a big chunk of change–it is for someone like me, too–but for that price, you get a large crate of veggies and eggs once a week for EIGHTEEN weeks (June to September). Some quick math’ll tell you that’s $22 a week, which I already EASILY blow on produce during the summer. Also, you have until April 1 to pay for it, so you don’t have to cough up the $400 all at once. If you’re not a big vegetable fan, consider giving this gift to a veggie-lover you know. Or pay the $400 to provide a local needy family with eighteen weeks of fresh food. Or, heck! Split your membership with a friend!

Anyway, all this eatin’ and drinkin’ and browsin’ went on from 6 to 7pm, and then we all packed into the sanctuary for the music. That’s when the goosebumps started.

We sat on the front row, which was good for Brandy and her camera. But then I realized it didn’t make for a discreet exit should one of my kids (okay, I’ll just say it–my SON) get unruly. AND I realized I left his notebook and markers in the car. UGH. So I mentally and emotionally prepared myself for being THAT MOM–you know her… that one who has to escort her noisy monster child out of there. Well, call it a Christmas miracle, but after I found an extra pen and surrendered my notebook to him, he was perfectly content until well past bed time. Shew.

The music began. First up was Scott Murray. He sang “The Twelve Days of Christmas” and one he wrote called “Joseph and Mary,” inspired by his realization that Mary traveled 25 miles to Bethlehem on a donkey, while she was nine months pregnant. You can add THAT to the many reasons that lady deserves a song.

Chris Howdyshell sang a couple of songs, including “Rudolph,” after apologizing that his songs “aren’t pretty” and predicting that “the a cappella thing’s gonna be gorgeous” and “the Yoders will do somethin’ outrageously fantastic.” He also told us how he recently received a letter from a guy in prison, and then he said something about the Bumble, which I missed because I was writing down all the other stuff he said, lol.

Heather Kropf held us all captive with her sweet voice, accompanied by the piano and Brad Yoder’s clarinet. Brad performed next, first playing a song called “As Easy As Birds” and then leading the audience in “Angels We Have Heard on High” from the hymn book. This sorta surprised me because I wasn’t expecting to stand and sing… but Chris Kniss and Heather helped lead the song vocally, and everyone behind me just suddenly broke out into spontaneous, beautiful harmonies with no instrumental guidance but Brad’s rogue clarinet. The sound filled the room and the kinship of it all made me start to cry a bit… It was really sweet, and it was my favorite moment of the night. 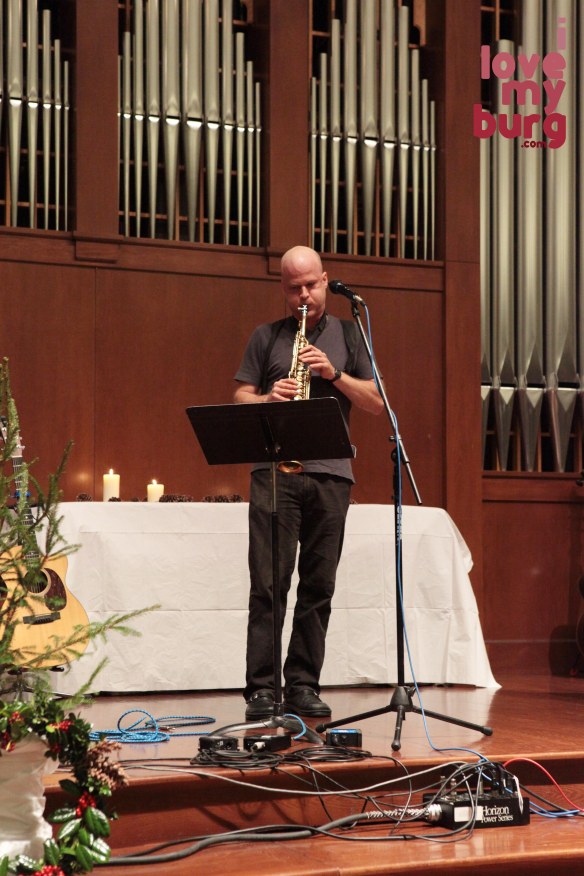 The beauty continued with Chris Kniss’ performance of “What Child Is This?” and “The Christmas Song,” followed by my old friend Bob Driver’s guitar-only rendition of “God Rest Ye Merry, Gentlemen” (he and I worked at Clayborne’s, if you remember that far back…) His lovely wife Trudy Cole and John Hall got everyone’s feet tappin’ in a spirited duet before Shekinah blew everyone away with their a cappella performance of “Coventry Carol” and a traditional Spanish song. As my son is always mesmerized by groups of beautiful women with radiant voices, this was his favorite part of the night, and he gushed about the “purple ladies” all the way home.

We’d reached intermission and the kids were lookin’ a little limp. We steered them back out to the desserts, and they perked up in no time. The second half simply went too fast. Nick Melas and Nichole Ehlers sang a few numbers… not necessarily Christmas songs, but songs about the Prince of Peace at any rate, including one Nichole wrote from the book of Luke. Their voices together were perfectly stunning. The evening rounded out with Greg Ward, Jessie Trainum, and last, Trent Wagler… and then a full-on singalong that left everyone warm and fuzzy. 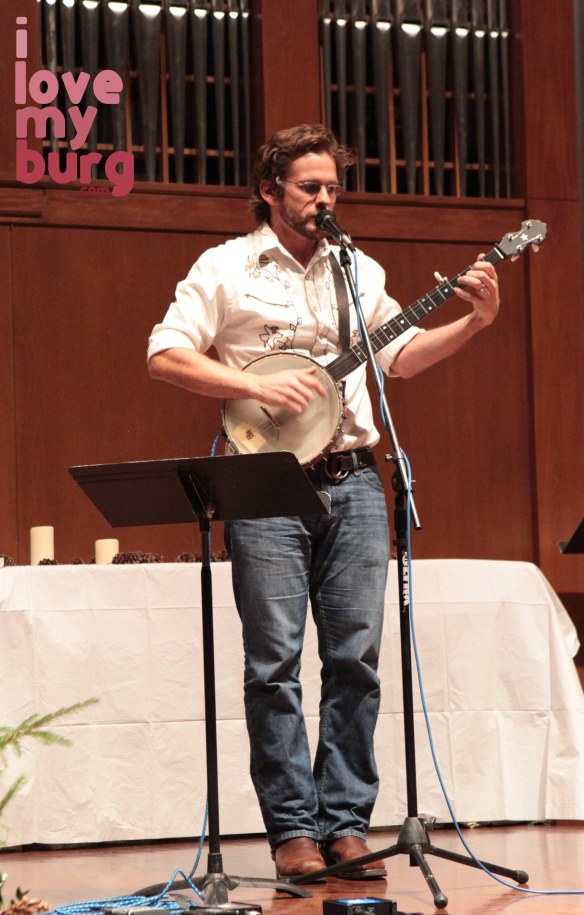 As Brandy put it, “Singing ‘Silent Night,’ with a hymnal in my hand, in a dim church with some of Harrisonburg’s finest was the coolest thing I’ve done all day.”

I am so grateful I was able to attend this event. I know this sounds cheesy, but it’s something that will stay with me a long time. I think it was the warmest and loving-est group of people I’ve ever encountered… people who saw a need in Harrisonburg, who worked extremely hard for several years to make it happen, who compassionately and without hesitation serve members of our community who might otherwise be forgotten, and who do it all for very little in return… THEY are the miracle. Thank you, thank you, thank you. Where would we be without people like you??

Merry Christmas, Harrisonburg, and may you be warm all the way around this holiday season.

Copyright © 2012 · All Rights Reserved · ilovemyburg.com. Written content by Katie Mitchell. Photos by Brandy Somers. This material may not be copied, downloaded, reproduced, or printed without express written consent. Thank you for respecting our intellectual property.

8 thoughts on “it’s christmastime in the city: our community place christmas concert.”