I’m an English teacher. And I feel I know a thing or two about literature. But attending the Carl Sandburg poetry reading at the Blue Nile recently made me painfully aware of how disconnected from poetry I’ve gotten.

I’ve read tons of poetry–the “canon,” if you will–Yeats, Keats, Eliot, Thomas, Blake, all the Beats, the Brownings, Owens, countless others… but I’ve not even dipped a tentative toe in that pool in a long time. And even as a teacher, I ask myself, “What the heck is poetry anyway? I mean, really–what is it, other than a section in the textbooks collecting dust in my classroom?” It’s literature that’s alive. It has a pulse and a heart and lungs and a gut. It has genitals and a butt and blood and a soul and it walks amongst us every second of every day. It’s an art form which, like music, can bend and twist to meet mood and message.

I was inspired on this night. Yet again. By my city and the talented people who live here.

Local action figure Paul Somers puts on these casual poetry readings, each one dedicated to a different poet. The idea is that participants (and it’s open to everyone) write poems in the style of that poet. Then everyone gets together and shares their poetry. They can also read a poem of that poet. Really, anything goes.

And sharing poetry’s a big deal. Because with poetry, it’s just you and your words and a microphone. Maybe a guitar or piano or bongo… but you don’t get to hide behind the noise of your band. You don’t get to hang your piece on the wall and walk away from it. You’re there with it and everyone’s reaction to it. The horror of performance art. 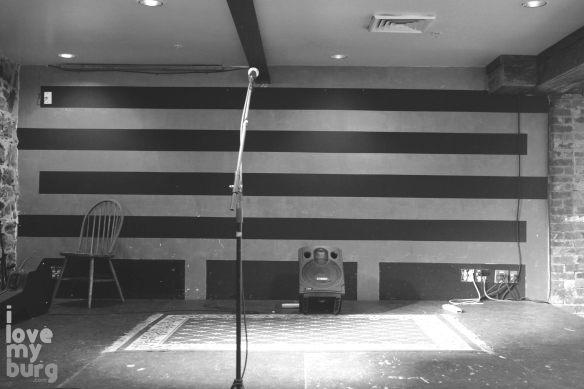 So I was with nine brave souls on a recent Monday at the Blue Nile who stood poetically naked in front of a crowd of seventy-five or so spectators. Paul, being the emcee of the evening, started things off by reading a description of poetry he’d written, comparing baseball to “a game of catch” and asserting that “Sandburg put the poem right in your mitt, every time.” Even in the humbling company of poets like Amy Lowell, Dorothy Parker, William Carlos Williams, Pound, and Eliot, Sandburg’s been hailed as the “first urban American folk singer.” In his poetry, Sandburg explores the guts of American society–the working poor, industrialism, farm life, and the geographic expansiveness of his nation.

Paul read Sandburg’s touching poem “Back Yard” (“Shine on, O moon of summer”)–fitting for this summer night with friends–and several of his own, including “Little Boy Pink” and “Animal Intellection,” about a fox, which I really liked… and this perfectly expressed teen love poem reluctantly titled “Fish Bone Poem,” containing the piquant line, “The world rolls off the edge of the table every time you walk in the room.” Oh, Christina Harbor, you’re killing us all. You and your weirdly symbolic name.

Next up was Brent Finnegan, who reminded us in his poem “To Breathe” that “touch, they say, is sometimes worth the pinch.” It’s true. What matters most also hurts the most. He then sang a couple songs with his pensive guitar, like “Waiting for the Wolf,” in which he howls, “When the darkness falls, I wanna feel nothing at all.” RESONANCE. And “The valley’s no greener and the love’s no deeper than the love we left behind.” By the end of his performance, I was stinging. Still am.

Then we heard ZaMont Burton read a couple of his poems, “MOTH” (Music Of The Heart) and “The Meadow,” both very sweet love poems told in a dream-like narrative in which the speaker moves through time and space as his perceptions change. He writes, “The next time I saw you I felt blues in your heart,” and “As we got closer to the meadow, my fear of you vanished.” The line between what’s real and what we perceive thins and thickens, appears and disintegrates.

Kevin Edwards, aka “the cat guy,” took the stage and felt the need to warn us that he “writes short poems.” He also provided a brief summary of each before he read it, in case we didn’t get it, like “This one’s about booze.” “This one’s about gettin’ old. Ear muffs.” “This one’s about loss.” “This one’s about not drinking so much.” I think he was trying to prepare us for some really bad poetry. Sorry, Kevin–your poems were good! Oh, how we all can relate to “a standard less handsome with time.”

Daniel Gilhart awakened for us Sandburg’s nature-loving side in his poem “The Woods of James High,” a lengthy, image-rich work evoking the joy and serenity of a meandering stroll, which, by the way, he delivered from memory. Lines like “we brushed the crumbs from our beards to leave a trail going home” make me long for a nippy autumn day marked by a blue sky so beautiful I keep staring at it to be sure it’s real. The poem also traces the emotions that come when one walks and thinks for a long time, remembering past sorrows and triumphs, bittersweet memories and the anguish of unknown terrors ahead.

Next up was Jeremiah Jenkins. Before he began he warned us: “I’m a little out of it. I’ve been camping in the woods for four nights.” And because of that, time crept up on him and he had to grab a few poems from his “pile of poems” for tonight’s reading. Pile of poems? You’re in better shape than I! I’m now determined to create my own such pile. Anyway, his first poem, “Her Children Followed,” was a narrative with a narrow focus–the story of a woman, who’s also a mother, who’s also a prostitute, and her struggle. He also shared “No Longer Our Own,” about what’s happened to his hometown neighborhood, how what was home has been razed and replaced with something both unrecognizable and generic. I loved the juxtaposition of sweet jelly with the “dark, dank basement.” But the poem of his that got to me the most was “What is Violence?”, a gorgeous/ugly/frightening/assaulting  glimpse of violence in America and all its forms. We think of violence as gun shots and black eyes and dark-alley muggings, but maybe not as “needin’ three dollars that bad” or as “the severed ear I found one September morning.” Jeremiah, straighten up that pile. It’s actually a book waiting to happen. 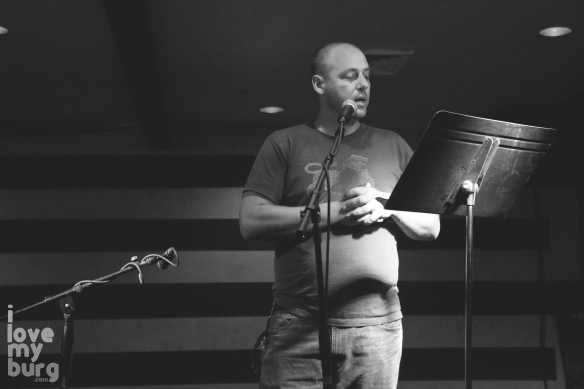 I was excited to see Susan Facknitz on stage next. You might know her–she teaches literature and creative writing at JMU. Her poems were so mesmerizing I forgot to take notes about two of them–“The Fence” and “Endless Relations.” But “Girl 3” is about her being the third child of eight with not a lot of money or possessions to go around. It’s a situation to which many of us relate–the hand-me-downs, the seeming injustices among siblings in a large family, the strange meals our mothers pieced together right before payday. And although those challenges are frustrating, Susan’s rendition radiated a gentle beauty that entered me the way a photo would. As she put it, her family “lived a discarded life. Barn doors for picnic tables.” Making do, yes–but there’s something about barn doors that’s better than a brand-new Ethan Allen table, right?

Katelyn Romaine’s poems were about American girlhood, so half of us could relate, and the other half eagerly listened for some mystery about the human female to be revealed. Her funny and sarcastic poems garnered several chuckles from the crowd, but they also, like “Questions About Limbo,” hinted at the uncomfortable parts of life, like “how reunions remind you of death and little meannesses.” Exactly. That’s precisely why no one likes them, but we all get roped into going somehow.

The final poet of the evening was Chad Gussler, who happens to be a fan of Basho, a 17th-century Japanese poet who wrote lots of haiku and also mixed haiku with prose. Chad wrote his poem “Millrace Canal” combining Sandburg’s love of nature and Basho’s simplicity of expression, and it worked beautifully. It even contained a few haiku. The poem takes the listener on a journey through fields of “white phlox, white roses, milkweed, and body odor” and past “a floating, sinking red canoe.”

I really wish there were room in this post to publish all the poems shared that evening. But there’s not, nor could I write them down fast enough, ha ha. I do have, though, a few bits and pieces of poems left in my notes, so I’ve put them together into a poem, collectively written for Carl by Paul, Brent, Zamont, Kevin, Daniel, Jeremiah, Susan, Katelyn, and Chad. Here it is:

A lightning bug like a pixel of the coming dawn,
When darkness falls, I wanna feel nothing at all.
As we get closer to the meadow, my fear of you vanishes.
The stars abate themselves, just as we abate ourselves,
And the kids say, “Oh, we hate what we’ve become.”
The children follow–they seem to know the way.
Blurred and blended… death and little meannesses…
Everything is
As it should be.

The next poetry reading will honor the life and work of Walt Whitman. You should come–it’ll be at the Blue Nile again, sometime in September. You can find their events calendar here. You don’t want to miss it!

2 thoughts on “our poetic harriSANDBURG: poetry night at the blue nile.”